On Monday, I spent 7 hours raking hay. (You didn’t really think I meant money, did you?)

Yep, it’s hay-makin‘ time in Irish Grove, and when the hay is ready, it’s ready. It doesn’t wait around for you to finish the laundry or run a needed errand, and it doesn’t care if you have to cancel that scheduled play date with the kids that they’ve been looking forward to for two long months. It doesn’t wait for an empty day on your calendar, or even for the weekend. Gees.

Making hay can be a complicated and unforgiving process, especially for beginners like us. The alfalfa’s gotta be at just the right maturity to ensure a high quality, highly-nutritious product for the cattle. That is when the plant is in the budding out stage, right before the flowers bloom. And that can take about 28 to 30 days from the previous cutting.

This is what the hay ground looks like about one week before it’s ready to cut. 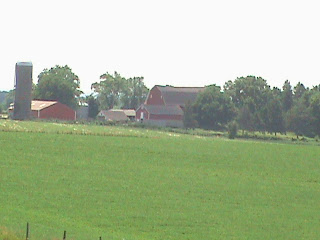 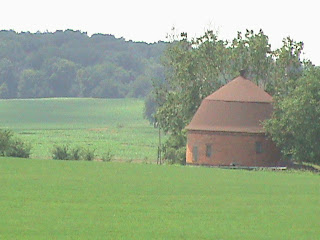 That’s our barn in the distance. And that’s Mom’s round barn alongside the hay field. Very cool, eh?

Of equal importance to proper plant maturity is the weather. I have to italicize weather, because I can’t emphasize enough how important it really is. From the day you cut the hay to the day it gets baled, it is really important that it doesn’t rain. Rain causes the alfalfa leaves to wilt and yellow, and could even cause the the hay to rot, which is obviously undesirable. It also delays baling. The longer the hay is exposed to the elements, the more nutrient loss you will experience. So, depending upon humidity levels, and the amount of sunshine and wind present, you will need about four full days of dry sunny weather for the hay to properly dry. Finding that four-day window can be challenging and frustrating, especially during the spring and fall cuttings.

Aha, good weather on the horizon? Cancel all plans, dump the kiddos at Gramma’s, and get busy!

To mow hay, you need a tractor and a haybine: 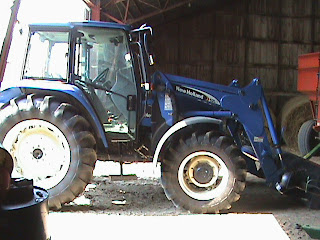 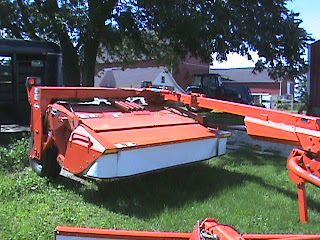 These two machines will be connected via the PTO, which incidentally does not stand for Parent-Teacher Organization. PTO is short for Power Take-Off. The PTO is a handy-dandy device on the tractor that basically enables all of your farm implements to do their job.

When you finally get everything connected properly and you’ve said farewell to your lovely children, you get to work mowing the hay. Mowing hay may look easy, but it isn’t. You’ve gotta look ahead to watch where you’re going, and behind at the same time, to make sure you’ve got the mower positioned just right. If it’s off, you could either leave a swath of uncut hay bobbin’ in the wind, mimicking you’re novice abilities, or you could cut too narrow a swath, meaning you’ll have to make numerous extra trips around the field, wasting time and diesel fuel.

The swaths are called windrows, and look like this: 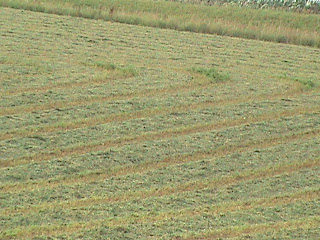 See those tufts of alfalfa on the corners? That’s proof that yes, we are rookies, but also that corners are especially tricky.

Hay must be crispy-dry before you bale it, because it is going to be stored in close proximity to other hay bales. Any moisture present will start to decompose the hay, causing heat to build up in a very tightly packed space. And if that happens, you have a pyromaniac’s dream-come-true, right there in your very own backyard or barn. Poof!

So, the next step is raking. Once the top 80% or so of the windrow feels crispy-dry, you rake the hay, which flips the alfalfa over and fluffs it all up nice and pretty. Many people hear us saying we have to rake the hay and think we mean by hand. Fortunately no, even though that is how it was done before all these fancy machines were invented. 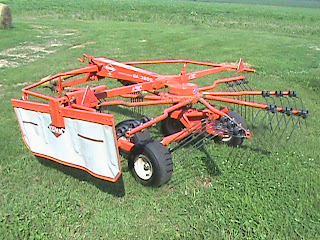 It’s called a Gyro-rake, and we connect it to the tractor, again via the PTO, which will spin those little pitch-forks around and around. The forks throw the hay against that white gate, where it then falls to the ground in nice little fluffy rows.

After I spent 7 hours rakin‘ hay on Monday, the field looked like this: 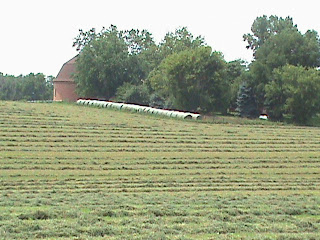 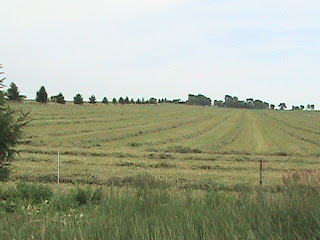 Can you see the difference between the flat windrows above, and the nice fluffy rows? Now the air can really get circulating in there, to quickly dry the remaining damp hay.

Oh, and one more very important thing: you never, ever rake the hay if it’s going to rain. This may come as a surprise to most of you, but occasionally the weather forecasters are wrong! I know it’s hard to believe, but sometimes our four-day-dry-weather-forecast miracurously turns into thunder clouds looming in the distance. If that happens, it’s better to let the hay lie there, and turn the other cheek. Rain will cause the hay on top to yellow, but the bottom leaves can stay green and fresh if you’re lucky. (And if you do rake before rain, you may also be subject to a gruff lecture and once-over from Farmer Bill. Which is not pleasant. Which I experienced the first time I tried to make hay.)

We don’t own a baler, so we have to call ahead and make sure the local guy can come before we dare think about raking. This time around we had contracted with some local fellows who will bale it and buy it. They are large hay brokers, and deliver hay to dairy farmers in Wisconsin. It pays less, but it also saves us the hassle of storing and marketing the hay ourselves. When they bale it, they make it into large squares, which look like this: 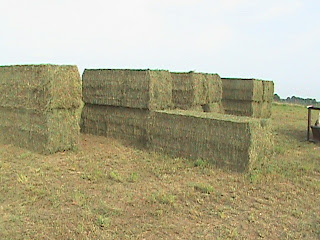 They then load it up onto a semi-trailer, and send it off to some very lucky cows. 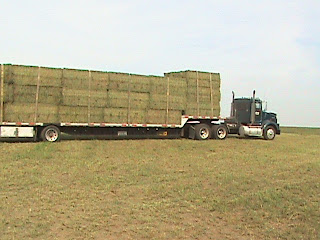 To quote Irish Grove’s Catholic mass, “Happy are those who are called to this supper.” Or in this case, happy the cow that gets to chaw away on this good ole’ Irish Grove green stuff.

And we get to “relax” for another 28 days. And counting.