What Type of Vines Grow Beef? 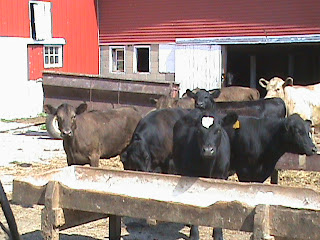 Being the country bumpkin that I am, one of my favorite riddles is: What type of vines grow beef? It’s a riddle that’s as old as the hills, I know, but I still love it. It’s a “groaner”, the highest type of humor in the Purnell family.

Who are the Purnell’s, you may ask? Well, they’re the wonderful German-English family that produced my wonderful mom, Marcia! And they’re also the ones that add a definite touch of class and culture to my immediate family. I don’t mean to diss the Flynn’s, of course, but the difference in the two families is quite striking:

A Flynn get-together is a rowdy, loud, winner-takes-all affair, while an event at the Purnell’s is a soft-spoken, well-mannered affair. You can relax with the Purnell’s, which might very well be dangerous with the Flynn’s. The Purnell’s will nuture you, they’ll give you a sweet hug and kiss, and they’ll even tell you “there, there” when you’re feeling low. The Flynn’s will hug you too, but they’ll also squeeze and shake you, slap you on the back, and give you a kick in the ass if they feel it’s warranted. The Purnell’s are the yin to the Flynn’s yang.

But I’m trying to talk about cows, not families, and I’m way off track.

Over the years, we’ve raised lots of cattle in Irish Grove. The farm originated with milking cows when Great-Grandpa Edward first bought the land. Grandpa Lowell continued milking until his untimely death, and then the tenant farmers, the Brown’s, milked until the mid-1990’s. (The Brown’s deserve their own post…..check back!)

When my mom and dad decided to build a house by the round barn, my dad lost little time in acquiring a small herd of cattle. But this time they were beef cows. Dad loved playing farmer with those cows, and he dove into the work that animals bring with gusto. He mostly raised steers, or feeder cattle as they are called. But with those cows, he proved to everyone, and most importantly to himself, that he was a Hard Worker. And there was no higher standing in John Flynn’s world than that of a Hard Worker.

Looking back, I can see that the beef cattle were also, arguably, my dad’s most effective parenting tool, and he used them extensively while raising my siblings and me. The cows were used to teach us responsibility, because they needed daily care in the form of morning and evening chores, and they also taught us the perils of procrastination. I can remember numerous occasions when I ran as fast as I could, completely terrified, through the shadowy area between the barn and house–all because I had put off my afternoon chores until late evening in the hopes that someone else would ultimately do them for me. No such luck.

The cows were often used for discipline. Many a long day was spent pitching manure as punishment, usually because my sister Laura was lousy at misbehaving without getting caught. And every time she would get in trouble, my dad would look at me and grumble, “get out there and help your sister”, which seemed especially unfair. He would later laugh and say it was prevention.

Last but not least, the cows were effective at teaching us humility. You can only imagine how humiliating it was when we’d hear our school friends, or especially that boy we had a crush on exclaim, “Ewwww! I can’t believe you’re scrubbing a cow’s butt,” as we washed our steers before our 4-H competitions at the Winnebago County Fair.

Parenting tactics aside, I can now see that my dad mostly loved his beef cows because they allowed him to feel connected to his past, and because they kept him humbly rooted in the farm. They offered him a peek into the life of his father, Lowell, who died when he was only eleven. They allowed him to measure his success in life by a standard that his father would recognize: Hard Work.

When dad died last year, we sold his herd of cattle. It sounds sudden, I know, but it was actually following his plan for the year. We had planned to switch breeds that year, and embark on our new farm project: raising grass-fed beef. It was, at the time, a relief to have the cattle gone. We were tending to our broken hearts, and to our suddenly difficult task of simply living.

But when we bought 10 steers from Farmer Bill this spring, it felt like we were coming home from a long journey. The cows were back. The barns were occupied. The pastures were happy. And we could breath a little bit easier.

The cows have returned to Irish Grove, and have allowed me to keep alive my connection with dad. And not only him. The daily routines and occasional problems that the cattle bring us tap into a rythym deep within that connects me to my past, my Irish ancestors, my origin.

And I must admit that I have already sent Ana and Madelina, ages 8 and 5, out to the barn, pitchforks in hand, after a particularly tiring day of bickering. Armando, age 2, is safe. For now.

What type of vines grow beef? Bovines, of course.