Back in the mid 1880’s, a bunch of Irish immigrants descended upon this innocent corner of the world and altered it forever. It’s hard to imagine what the area was like before they arrived, but they settled in and established a small historical community that is now lovingly referred to as Irish Grove. My ancestors, the Flynn’s, were a part of that group. Now the Flynn’s have a fairly decent reputation in the immediate vicinity, mostly known as a fun-loving, hard working and hospitable crowd. And while that is by most accounts pretty accurate, we certainly have our faults, not the least of which are our loud, booming (deafening, really) voices, our competitiveness, and our over-sized egos.

Irish Grove can’t be found on a map, even though many people call it home. But the community is literally split between two or three local towns, which at second thought seemed strange. So the other day I googled Irish Grove, and found that it is located in Rock Run Township. Aha, Rock Run Township. Wait a second….Rock Run Township? Like my little guy Armando likes to say when he receives an unacceptable answer to a question, “Huh?”

Anyway, unlike Rock Run, Irish Grove does exist, and the proof lies in the puddin’, or in this case in the heart of the countryside: St. Patrick’s Irish Grove Catholic Church. 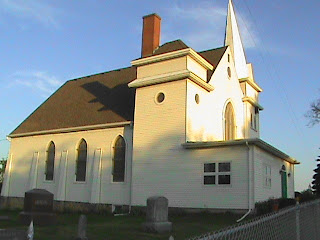 I was raised in this church, and, like most diligent Catholic children, hated getting up for Mass on Sunday mornings. My parents would let us sleep just late enough to 1) fool us into thinking we weren’t going that day, and 2) ensure that there was insufficient time to primp and curl and properly prepare for the eye candy, oops, I mean soul food at church. Sorry, Lord.

But attending Mass at Irish Grove had its benefits, too, one of which is mentioned above. The second was the coffee and donuts served in the basement after church. And the third was running around the cemetery after Mass, climbing onto and jumping from one headstone to another, as my parents would laugh and commune with the other parishioners, many of whom are extended family.

Because we Flynn’s like to talk a lot, we were undoubtedly always the last people to leave for home. When the last stragglers finally said their good-byes, and conversation was no longer an option, my dad would walk around the cemetery with us and point out tombstones where an ancestor, “good old so-and-so”, lies. And he would tell us what he remembered about him or her, and how we were related to them. He’d say, “He’s your Grandpa’s first cousin, on his mother’s side,” in a slow, cadenced way that made me think he was practicing for his own benefit, lest he forget his family history (the mother of all sins).

I’m still a member of Irish Grove Catholic Church, and I’m also still pretty lazy about Sunday Mass. But when I do go, I make sure my kids get an opportunity to jump on those headstones as I chat with the parishioners making their way to their cars. I then attempt to relay those familiar old family connections to them (lest I commit that unspeakable atrocity against my kin) and usually fail to remember most of the details. All the while, my husband Marcel is patiently waiting for me to finally stop talking. And with his natural-born Panamanian sense of propriety, he is properly horrified at how wrong it is to let our kids jump and stomp on someone’s final resting place. I give him my best harrumph, and tell him that not only is it right, it’s tradition, for goodness sakes. And I’d just bet those hard-working, fun-loving old Irish men and women lying beneath that sacred ground are all the happier for it.