The Method behind the Madness

I realize that I’ve pointed out my farming inadequacies more than once or twice in this blog, and that my constant self-humbling could become more than a little tiring. But I do often wonder to myself: 1) who the heck do I think I am, trying to run the farm? and 2) why haven’t I screwed things up yet?

Well, it turns out that I have a little secret. A well kept secret. A secret that I’m about to let you all in on.

Shhhhhhh…….listen closely. There is a method behind the madness. And that method is Marcel. That’s right, my incredible husband, Marcel. 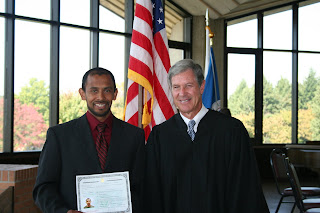 For those of you who don’t know Marcel, he is the only Panamanian living in Irish Grove. Still not ringin‘ a bell? Well, he has an awesome smile, a laugh that sounds just like Eddie Murphy, the patience of a saint (he’s got to put up with me, the poor, poor man), a generous spirit, an uncanny ability to eat huge amounts of food and still stay incredibly thin, and the tenacity to put up with me (did I already say that?).

But more importantly (at least for Irish Grove’s sake), he is a master mechanic with a God-given ability to repair even the most mind-numbing of mechanical, electrical, and logistical problems. A common complaint I hear from homeowners is that when you finally repair the roof, for example, the gutters fall off. “There is always something” is the collective sigh ringing out across the country. Well, when you run a farm, multiply that frustration by a thousand…..

…..the auger’s broken and we can’t get the corn out, the water tank has frozen over and the cattle are thirsty, the blades need sharpening, the tractor won’t start, the sliding barn door fell off the track, the raccoons are eating the chickens (again), the electric fence isn’t working, the wheel fell off the grain wagon, the lights on the cattle trailer won’t work, etc. etc. etc., ad naseum. Marcel is the answer to all this and more.

That is not to shun his inventive nature, of course, because Marcel spends a large quantity of his time at home in the garage, inventing something that will save us time or labor. In fact, I often tease him that he is the hardest working lazy man I’ve ever met. And while he has jerry-rigged many, many a system that has made our lives around the farm much, much easier, he has also come up with a few ideas that have had me laughing and shaking my head for days.

Like the sweep auger he invented so I wouldn’t have to shovel the last 500 bushels or so of soybeans out of the bean bin. It was a great idea, and very sweet considering that he wanted to save me a long day of dusty, dirty, sweaty labor. But when you have an open(!) corkscrew blade whirling around at 50 mph, and the dang thing weighs close to 100 pounds, and I’m supposed to lift it and throw it onto the pile of beans without throwing my back out or getting my hand caught in the auger…….well, let’s just say I tried for over an hour to get it to work, mumbled a few choice words that day (in true John Flynn style), and shoveled the beans out anyways.

But that pales in comparison to his now infamous invention: the Chicken Condom. Yes, you read that right, I said chicken condom. As gross as it was, Marcel was being his kind, generous self and was really just trying to accommodate some of our egg customers, who were a little wigged out by the dot they sometimes found in their eggs. You know, that little brown dot that means the egg was fertilized? Well, Marcel set out one day to solve this little problem by inventing a condom for the roosters. He took the tube out of an old bicycle tire, and fashioned it so that there were two looped ends–one to hook around each wing–that then met at the bottom in a sort of ‘V’ shape that got hooked under the tail feathers. And this is the important part: here is where a flap hung down to supposedly impede the rooster from penetrating the hens.

I soo wish I had taken a picture of it. Perhaps then we could have had it patented. And revolutionized the chicken world forever. Needless to say, I found the condom in our backyard a few weeks later, discarded hastily by that promiscuous, dirty, and very naughty rooster with absolutely no respect for the fact that we have young children that play in that very area. The very thought!!

And so, while I poke fun at my husband for his twisted, I mean, less productive ideas, he is the reason we are up and running in Irish Grove. Marcel is the method behind my madness, the how and the why of it, the safety rope that we depend on, and as the kids say, the one who can do anything.

And that’s no blarney.