April 25, 2010 / admin
You’ve seen this picture before.  On the left is my Grandpa Lowell, on the right is his brother, my Great-Uncle Donald.  They were the second generation of Flynn’s to live on and work this farm.  They were partners, as you can see noted on the side of the truck, but eventually, as their families grew, they decided to divide the farm between them.  Our road runs right down the middle of the original farm, conveniently splitting it in two, so Donald took the west side and Grandpa took the east. 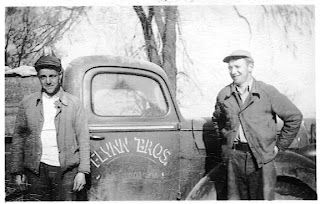 This morning I’m wondering if these men ever imagined that 65+ years and 3 generations later their grandkids and great-grandkids would even still live in the area?  More to the point, would they have guessed that their great-grandsons would become great buddies? 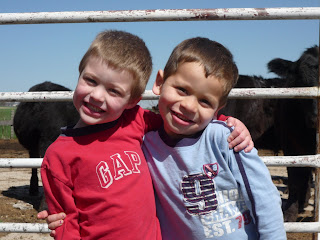 Could they have foreseen that these two boys would run free around the exact same farm where they grew up, and that they, too, will share wonderful memories of working and playing with their cousins on this lovely family land? 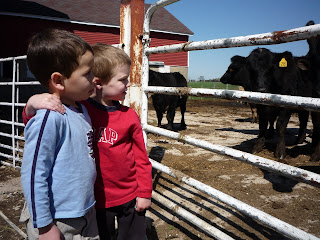 Maybe they did.  Maybe they somehow knew that, even in a vastly different time, the bonds between our family and our land were strong enough to keep us close to home.  Or that they were strong enough, at least, to bring us back when we had decided to take on the outside world for awhile.

I bet if they had thought about it they would have seen the possibility.  At least they would have felt the hope that it could happen that way.  I know that I’m guilty of thinking that way once in awhile.  Thinking about whether this farm will stay in this family past my generation.  Will my kids, or Laura’s kids, or Matt’s future kids come back to Irish Grove after they’ve tried on the outside world for awhile?   What about the Donald Flynn side and their kids?  Will they?  It’s anybodies best guess, really; everyone must make their own way this world.  But I think I’m safe to say that Grandpa Lowell and Uncle Donald would be pretty pleased to see these kids, these boys, in this day and age, tearing around their barnyard.  I know it pleases me.

One question remains, however, and it’s something that haunts me from time to time.  Do you think Grandpa Lowell and Uncle Donald could have imagined this? 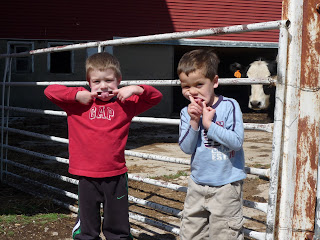