Change–For Better and For Worse

I tend to ignore the conventional side of the farm. On this blog, that is. Truth is, I never wanted to be a conventional farmer. Row crops–corn and soybeans–with their genetic potential and maturity dates, their herbicides and pesticides, their crop insurance and FSA payments, their demand for large and expensive equipment, their moisture levels and storage charges–they’re not what’s got me whistling while I work on the farm, if you know what I mean.

But I want to be very honest with you all about my relationship with conventional row crops, so that you can be honest with yourselves about yours: the row crops on this farm have been financially propping up the organic acres for 4 long years now and they should receive the credit they deserve. And I think I’m safe in assuming that row crops have probably been financially propping up your ability to buy organic and local as well. In other words, we all need to be better about leaving the judgment behind while we strive to do better.

We made some changes this year regarding our row crops. Changes for better and for worse. You see, last year was one of those years that just about breaks a farm. I have already whined and complained enough about the quadruple whammy of last year’s high input costs + lower crop revenue + wet harvest weather + a gazillion dollars worth of drying charges, but the result isn’t pretty. The result is a farm walking a fine line between financial solvency and financial ruin. I think the most shocking part of the whole situation is that it only took one year to get to this point! One year! (Ok, so the quadruple whammy also coincided with some needed equipment purchases and the removal of one field from the sugar daddy row crops to that cute new hussy on the block named Organic Transition.)

Anyways, since I’ve run the farm I had refused to plant GMO anything. Straight conventional all the way, baby. I was filled with self-righteousness and an unending optimism that only new farmers have: if it worked before it’ll work again.

Except it didn’t work. The weeds on our farm are typical of the weeds on most farms that have been conventionally managed for over 50 years–resistant to many conventional herbicides. Yes, we sprayed. And yes, the weeds thumbed their noses at us and laughed all the way to maturity. (Remember those posts that have Marcel and I wielding machetes and felling giant ragweed?) After 3 years of ineffective herbicide applications, low yields and falling farm revenue, I had to be honest with myself that my system wasn’t working.

So we changed our rotation to favor corn in order to level out the farm revenue we could expect year after year. We have 3 fields in row crops, which had meant if this year 2 of them would be planted to corn and 1 to soybeans, the following year 2 of them would be soybeans and 1 corn. Corn makes more money than soybeans–depending on the year it can be substantially more. So the way it was, we would have a decent farm income one year and a bad one the next. On and on and on.

We switched our rotation so that every year we’d have 2 fields in corn, meaning field #1 in 1st year corn (corn after soybeans), field #2 in 2nd year corn (corn after corn), and field #3 in soybeans (soybeans after corn). Revenue should level out so that we know, more or less, how much money is coming in. Better income control means better planning means more stability. Stability means less stress and less risk of financial ruin. Whew.

The bad news: corn on corn requires more nitrogen. (We used the same amount of anhydrous ammonia as last year, but also put on a pelletized, slow release product that will give the corn an extra boost as it grows.)

The good news: I planted non-GMO corn again, because the herbicides you can use on straight conventional corn are still effective and because we feed corn to our chickens and grain-fed beef. Our beef, egg and chicken customers don’t want GMO feed, so no GMO corn.

Soybeans are another story. Our soybean fields have been a horrible mess and our yields have been falling. There are fewer conventional herbicides that can be used on soybeans and our weeds are resistant to them. It has gotten to a point where they control large percentages of the field, crowding out the crops and competing for nutrients.

The bad news: we switched back to GMO soybeans. Round-up Ready, to be exact.

The good news: our weeds will be better controlled, our yields should increase substantially, and we’ll make a little more money off of the field. (More money = more money for that hussy O.T.)

On the fertilizing front, we made a definite change for the positive. A company based in Wisconsin, Midwestern Bio-Ag, sells fertilizers, soil amendments and forage seeds and work with both conventional and organic farmers. They promote balanced, mineralized soils for improved crops. Blah blah blah, you can read more about them on their website. 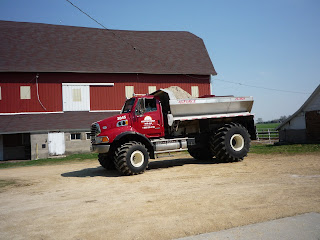 We have purchased our organic fertilizers and soil amendments from them for the past few years and have had wonderful results, but had stuck with the local Coop for the conventional land. This year I decided that I needed to move forward, even as I moved backward; I needed to give our conventional land some TLC. I gave it a good, healthy dose of readily-available calcium (calcium increase a plants ability to absorb nutrients) and high quality fertilizers with micronutrients and will continue to do so until we get the soil balanced. 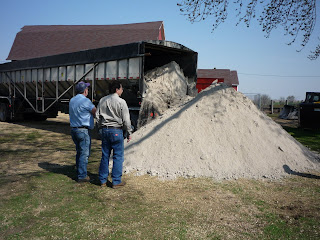 What I must do:

1) Get the weeds under control.
2) Balance the soil.
3) Force the hussy O.T. to support herself.
4) Give some loving to the conventional land.
5) Transition the land to organic as soon as financially able.
6) Keep the Repo man far, far away from the farm.

What you should do:

1) Support organics.
2) Support farmers in transition to organic.
3) Support medium-sized family farms, conventional or organic. (These are the ones suffering the most, and the truth of the matter is that conventional farms are better for the environment than housing subdivisions.)
4) Stuff the judgment to the very back of your junk drawer.

Change. It can be good or bad. For better or for worse. But it is what’s called for in these tough times.

“The definition of insanity is doing the same thing over and over again and expecting different results”. -Albert Einstein