Felling the Giant, one machete-swing at a time

That’s right, I said machete. Machete. A third-world tool that no self-respecting, American-born, tractor-drivin’, weed-busting conventional farmer would ever, ever touch.

I guess that’s why I’m not your usual self-respecting-American-born-tractor-drivin’-weed-bustin’-conventional farmer.

Cause a machete is what’s been occupying my right hand for a few days straight now, and I gotta tell you……ouch, ouch and ouch. My forearm is extremely sore, and my middle finger (yes, the naughty one) is barely working this morning. My hands are blistered and my waist hurts so bad from the rythmic ‘bend-swing-fell’ movement of the machete that I’m walking around, preggo-style, with my arms propping up my lower back. And no, I’m not nine-months pregnant! ‘Cause if I were, I wouldn’t be so %#$&* sore from using a machete.

But machete I did, and machete I will do again. Because we’ve got this little problem going on around here. OK, it’s a big problem. In fact, a giant problem. A giant ragweed problem.

Gaint Ragweeds are the enemy of all conventional farmers. They are this huge-mongous weed that grows about 11′ tall (seriously), their roots send out many stalks that happen to be as thick as small tree-saplings, and then. Then! Then they do something that is quite amazing, and extremely frustrating, especially if you’re 1) a farmer, or 2) a person who suffers from hayfever.

They put up this glorious (in their mind, at least) flower head, with copious amounts of pollen waiting for the most minute gust of wind to carry them straight to your nose and mine. (Cue sneezing and wheezing.) 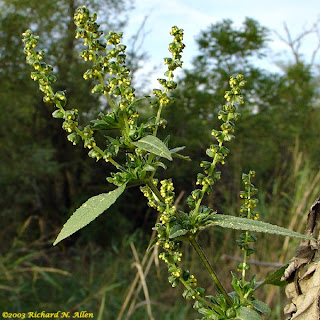 And when the pollen does its job of mixing with its friends (yes, it’s called cross-pollinating….I’m not really as dumb as I make myself out to be), the flower-heads will turn into seed-heads and drops thousands upon thousands of tiny Giant Ragweed seeds into my corn or bean-field. Which will promptly turn into thousands of huge-mongous Giant Ragweed plants next year. Noooooooo!!

Giant Ragweed are all too common in these parts. Especially on farms like ours where we don’t plant Round-up Ready anything. Round-up Ready corn and soybeans are also known as GMO crops–Genetically Modified Organisms. The scientists take genes from unrelated plants and splice them into the DNA of the corn or soybeans. This change allows farmers like me to herbicide-spray the crap out of our corn or soybeans without killing them. Except farmers like me don’t plant GMO crops. Did I already say that?

But before you think we’re all virtuous or something, we do spray herbicides on our fields. They’re called pre-emergence herbicides, and they’re sprayed on the land before we plant the crops. They kill all those sneaky little weed seedlings that sprout the moment the weather warms. And they give our crops a ‘head-start’, a chance to get established before the weeds come back and give ’em a run for their money. Or our money. Whatever.

Gosh, this is getting long.

So, we spray in the spring, and then try not to spray again if possible. If it’s really bad, we can re-spray, but these herbicides WILL shock the living daylights out of the corn or soy, and we don’t like to do that.

Re-enter the machete. Here I am, getting ready to go to work: 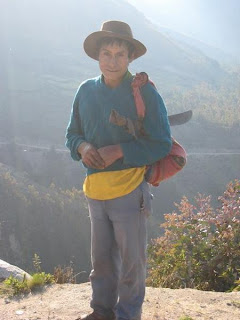 Marcel and I spent 5 hours slaying the giant over by my sisters house last week, and 4 hours at the back of the main farm two days ago. Yesterday I spent 2 hours, all by my lonesone, machete-ing in the same bean field as the day before. Another 2 hours will finish that field up rather nicely, upon which we’ll move over to a major infestion left by Laura’s. That one will take a good 5 hours or so. And I’m hoping that’ll be it for this year!

I’m also hoping that by the time we’re all said and done, my fingers, forearms and waist muscles will still be functioning and that we’ll have prevented 459.768 billion ragweed seeds from forming. Or something like that.

And that, my friends, will make it all worth it.

So look out, Giants. There’s a Machete-Wielding Gringa in these parts. She’ll getcha sooner or later. If she can move, that is.