That’s right. We had a lovely, odoriferous time not so long ago, on a nice, wintry day in March. 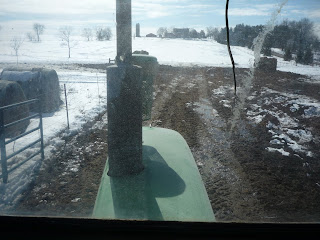 The picture above was my view from the driver’s seat of our JD 4020 tractor. I realize that JD 4020 means nothing to most of you, I just added that to prove how farmer-ish I really am. 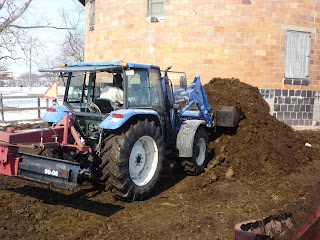 Marcel was working the blue tractor, loading up the spreader with manure.  (That’s a NH TL90A, in case you thought I didn’t know.) 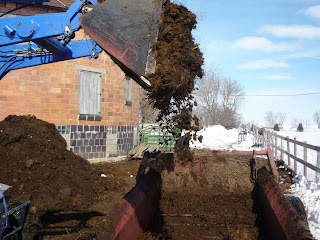 It takes a little more finesse to work the loader bucket.  I can do it, but Marcel can do it better.  See?  I’m farmer-enough to even admit that someone’s better than me.

Oh wait, farmer’s never admit shit like that.  Strike it from the record. 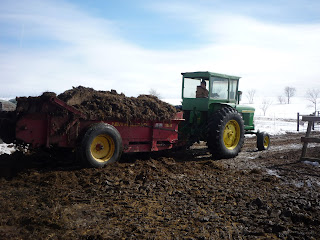 Once the spreader is loaded up, off I go.  Driving a 4020 with a loaded manure spreader takes finesse, too.  Finesse and lots of skill.  Ahem.

Anyways, I make my way through the stone-quarry pasture, out onto the road and up to the field south of our house.  The field will be put into corn this year, so any extra nitrogen is always helpful.

Here’s the view as I spread the goods onto the field: 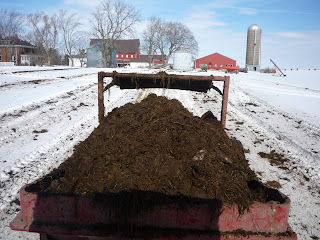 You use a hydraulic control to lift the back gate and then start the PTO, which spins some forks at the end of the spreader.  The PTO also moves some fins on the floor of the spreader which slowly push the manure from front to back until it’s all out and on the ground.  Pretty nifty.

And smelly.  “Smells like money”, as the farmers like to say. (God, I’m impressing even myself today.) 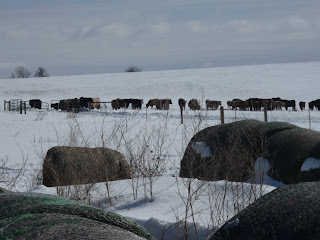 In the meantime, the cows are totally put out and complaining, and a few are acting all uppity.  I  overheard one say, “Humans!  Look at ’em.  They can’t get enough of our poop.  They’re squirreling it away as fast as humanly possible, as if it’s something other than yesterday’s hay bale.  God they’re gross.”

Hm.  I guess I failed to impress after all.