It wasn’t like we didn’t have anything else to do Saturday. I had 3 coats of primer to apply to my new (!) kitchen walls (a project which of course necessitated two trips to the hardware store for forgotten supplies), the electrician was out to look at some old wires we had unearthed in the process, Marcel and Rob were finishing up a job we had started two weeks ago–cleaning out the barns and spreading manure, my oldest had plans with a friend at 3 PM, and we were keeping my nephew for the night, whom was supposed to arrive at anytime. I had no food and my house was a disaster, but I was going to get to that, too, eventually.

So when Marcel called to say that the young heifer #19 was in labor and not progressing, I had no choice.  Everything else had to be put on hold; we switched gears and jumped into ‘birth-assistance’ mode. #19 had never given birth before and is quite small, so we knew she might have problems. Marcel was already up there cleaning up the manure pile, so he kept an eye on her as I quickly excused myself from the electrician’s conversation about his beagle puppy, grabbed the kids and gathered the birthing-assistance tools: 3 straw bales for clean bedding, rubber gloves for Marcel and I, and the birthing chains.

When I arrived, the chute we use to confine the mother had been pushed out of position during the manure operation, so we had to get the tractor and move that first. At this time the mother was prostrate on the ground, pushing with little progress. Her eyes were strained and her neck outstretched–we needed to help her, fast.

Next we had to separate #19 from the rest of the herd. This is the worst part–how horrible to have to chase a laboring mother around the barnyard, knowing what she is going through and worried about the life of her calf. We separated a group of 5 from the rest and corralled them into the barn. Once in, it was pretty simple to get the others out (they know something’s up and want out of there!) while keeping her in. The nice thing about a round barn is that the cows follow the contour of the walls and don’t get hung up in corners where they might decide to turn around and go the other way. So #19 kept walking until she reached our ‘capture area’.  We have a gate secured in place that runs from exterior wall to interior wall, blocking her progress, at which point we swing a hinged gate around from behind and capture her in a small triangle-shaped pen.

At the wide side of the pen is a door to the exterior with a cattle chute on the outside. The chute is the only way out of the enclosure, so the cows try to walk through it to the outside. As they progress through the chute, we close the headgate around their neck, shut the reargate and voila–we’ve got ’em! Now we can vaccinate them, castrate calves, pregnancy check, you name it. Here is a picture from last year, showing how it normally goes: 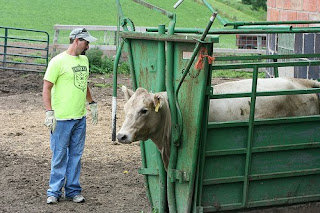 In this case, however, we didn’t catch the mother in the headgate–we shut it before she gets that far so that she has some free movement within the chute. And instead of shutting the reargate, we put a large 2X4 board through the back of the chute about thigh-high, preventing her from backing up but giving us access to her nether-regions.

We immediately gloved up and got to work.  Marcel inserted his hand into her vagina to find the calf’s hoove.  I passed him the chains and he hooked one end around each foot, just above the second joint so as not to break the calf’s ankle as we pulled.  This is harder than it sounds, and took him a good 10 minutes.  Once the chains were in position, we hooked handles onto the chain, waited for the mother to push and then pulled with all our might.  Literally.  It is really hard to pull a calf and it takes awhile to get that babe out of there.  We noticed the calf’s tongue hanging out of its mouth–not a good sign.  So I told Marcel to keep pulling as I tore away the placenta from the calf’s nose.  The nostrils were moving!  The calf was trying to breathe, so it was still alive!

If we could just get that head out. I pushed up on the cow’s labia to help widen the pathway as Marcel pulled. All of a sudden the mother gave a good push and the head slipped out. Now we had to quickly change tactics: if the mother sat down onto the 2X4 board, she would kill the calf. We had to let the calf hang there through a contraction to help squeeze the liquid out of its lungs, and then get it down quickly and gently. Here is a photo from last year showing Farmer Scott pulling one of our calves. He is a dairy farmer from down the road and taught us how to assist difficult births. 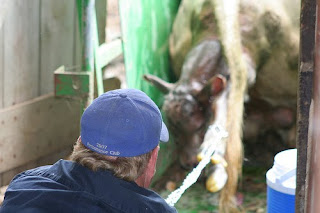 Isn’t that amazing?  He did this by himself with some assistance from my brother-in-law (my sister was taking photos).  That’s what I call experience.

Anyways, I stood underneath the calf and wrapped my arms around it (they are super slippery!) as Marcel pulled. The mother pushed, Marcel pulled, and I caught the calf. Well, I helped break its fall to the ground at least. Did I mention how slippery they are?  We removed the board and pushed the mother back into the pen where she went to work licking it, cleaning it, and mooing gently at it.

It’s a girl!  And she is a strong, spunky little calf.  We stood around and watched her try to stand up, which was the entertainment of the day for my kids.  They laughed and laughed as she stumbled and toppled over, head over feet, more than a few times.  But she did it.  Within 2 hours she was walking, nursing, and checking out her new home.  Pretty amazing, isn’t it?

Here they are, mother and daughter, immediately after she was born.  Welcome to Irish Grove, little lady.