Life’s been crazy lately, leaving no time to update y’all on the “goings ons” around here. And unfortunately today’s no different. My two girls are each at separate day camps in two very distant ends of our nearby city, I’ve got to rake 9 acres of hay and try to get it baled before it rains, again, and then both girls have separate softball games in two different towns tonight. Can you hear me scream, “Calgone take me away!”

So I’m writing here, quickly, to give you a few small hints at what has been happening in our life.
First, I directed a week-long leadership and environmental awareness camp for teenagers which was extremely stressful, but super fun. The camp was held at Atwood Environmental Center, a really great place where I happen to work part-time….part-time, at least, until Eco-Factor started. Then I worked way, way too much. Especially when you throw in the farm (in springtime) and my kids….in my world, that’s plainly a recipe for disaster.
But I love being surrounded by a bunch of really interesting, motivated teenagers….they can be so intense! And intense is a good way to describe the week, as I barely pulled the camp off. Whew. It was one of those times where I felt I couldn’t sit down for even a few minutes for fear of forgetting to do something important. Like feed the campers. Or remember my teaching points for each session. Or re-filling my cup of coffee for the 20th time that day. Which is also maybe why the week was so intense?
When it was over, my legs cramped up so badly I could hardly walk. Probably because I have this way of not eating when I’m nervous or stressed out. And then I spent a whole day on the couch unable to function in any way whatsoever. But I’m better now. And everyone liked the camp. So it was worth it. (I think.) Did I mention I was interviewed and that the interview is posted on a new healthy living website? Go check it out here:
http://www.healthyrockford.com/health/forkidsandteens/x1196182978/Nature-program-teaches-health-leadership
Second, we’ve had lots of visitors to the farm, including my cousin Jenny and my Liberian “sister” Eva and her daughter, Marthaline. I hope to have a post up about that in a few days.
Third, we’ve acquired another tractor, making us an all-powerful, oh-so-important two-tractor farm. And anyone who knows anything about farming knows that’s not really a big deal. But for us here in Irish Grove it’s a pretty big deal.
And finally, something wonderful has begun to happen. Something magical. Something absolutely fun, amazing, and awe-inspiring. Or maybe I should say “Aww-inspiring”……. 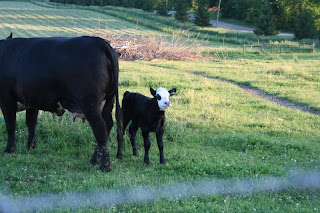 We’ve Got Babies!! Three of them, to be exact. And I’ll get pictures up as soon as possible. Which means as soon as I have more than 20 minutes to breath. Ahhhhhhhhhh!!