The mother cow’s physiological problem has played nicely into my own personal psychological problem. Namely, my fear of having to pull a calf on my own.

So when the mama cow went into labor yesterday, and little hooves were sticking out her rear by 1:00 pm, and the vet told me she wouldn’t be able to birth lying down without assistance, and she was literally butted up to the barnyard fence with no way to move her and no room for the calf to come out…..the reality of the situation washed over me and put me into a minor tizzy. It was just me, standing there in the barnyard, swearing a little, realizing I was gonna have to do this by myself, alone. Well, my kids were there of course, you know, but I was basically alone. It was all me. 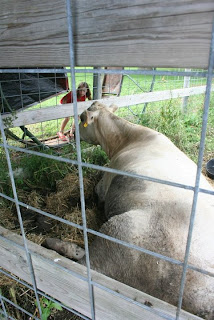 (This picture was taken after the fact, but shows just how close the mama cow was to the fence.)

What’d I do? I called Marcel and told him he needed to come home from work NOW. Having some backup on the way relieved a bit of my anxiety (i.e., psychological problem). Then I got to work. I hooked the chains around the babe’s legs and stretched open the vagina to see the calf’s nose. Her tongue was hanging out and her nostrils were not moving–I needed to get the baby out right away.

Since I couldn’t get behind the cow, I had to pull on the chains from the other side of the fence. I pulled, the mama pushed, and we got the calf’s head out! The calf shook her head a little, she was alive, but now came the tricky part. How do we get her all the way out when there is no room for her? I was worried the mother would break her back when she moved.

So I called in reinforcements. No, not Farmer Scott. Not the vet. Not Marcel–he hadn’t gotten there yet. I called my girls.

“Ana! Madelina! You’ve gotta help me, NOW!” I had them take over my position with the chains on the other side of the fence as I stretched open the mama cow’s vagina. The girls pulled as hard as possible, saying things like, “EW! The chains are all goopy,” and “This is really HARD,” while I stretched the mother open, pulled on the calf’s slippery shoulders, and rearranged the calf so she wouldn’t get squished. The cow started to accept the help, gave a few good pushes, and the whole calf slipped out.

Thanks to the help of my girls, we got that calf safely out of her mother.  5 minutes later, Marcel arrived.  Just in time to help us celebrate our small victory and get to work caring for the mother and babe.

The mother cow can’t nurse the calf lying down, so the little heifer has become a bottle calf and has moved up to a stall in our barn. The mother is still down, but she’s doing OK. She is eating and drinking water and hasn’t given up yet, so we aren’t giving up on her either. We fashioned a sort-of tent over her, using a large tarp and some round bale cages pushed up on their sides, to shade her from the hot sun. We’re hoping that with the calf born, the pressure on her nerves will be relieved and she’ll get up within a few days.

That’s our hope: a double happy ending and the end of the mother cow’s ‘physiological problem’.

Here are some pictures, taken by my sister and Ana, after the calf was born.  Enjoy. 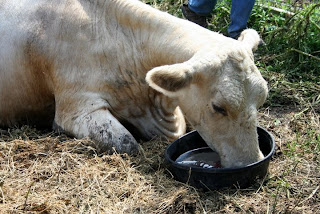 Water for the thirsty, tired mama. 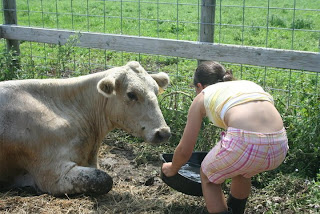 Madelina and Marcel, rubbing the calf to stimulate blood flow. 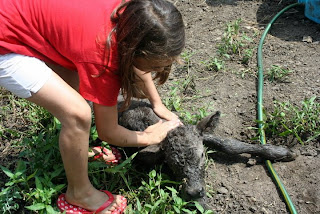 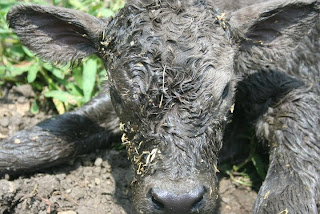 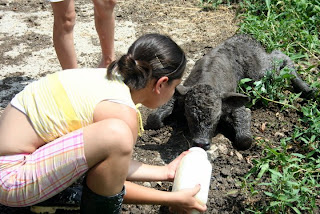 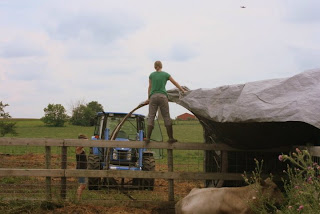 Making some shade for the mother. 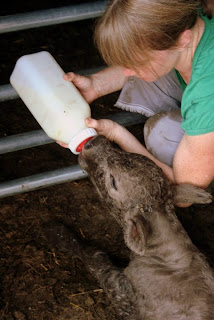 The ending to my psychological problem? A successful calf-pull and darling little heifer named Honeysuckle.