In Irish Grove, the time has come to separate our young Murray Grey calves from their mommas.

Unfortunately for the calves, this is pretty darn awful. They’ve got a good life…I mean, who doesn’t like a little milk with their hay? Add in a mother’s watchful eye, some playful nudges here and there…..well, there’s no better feeling in the world than Mom.
But the mother cows are pregnant, you see. And if you’ve ever been pregnant and nursing a babe at the same time, you’ll know that it isn’t much fun. And then you’ve got a certain bull with a certain, um….drive to, um……well, you know….checking out those poor little heifers, all innocent and cute and much too young to be initiated into such wordly matters.
Yes, it was time to move the babes onto the next phase of life.
Of course, we picked the most lovely of all late winter/early spring days. It was so lovely, in fact, that more than a few Irish Grove farmhands tried to get out of the job.

But being the whip-crackin’, ass-whoopin’ farmer that I am, I was having none of it. I mean what kind of farmer reschedules a work day because of a little rain? 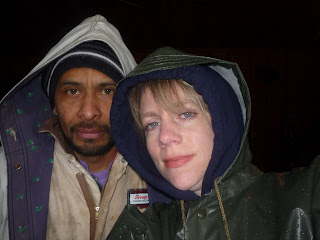 and yet Marcel’s still stalling on account of the rain, the wimp. 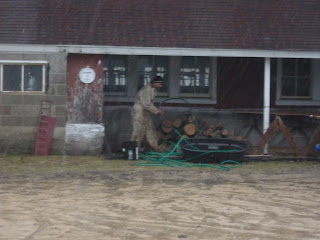 When you separate the cattle herd, all of a sudden space becomes an issue. All the animals need access to a water tank and shelter. We’ve got two barns and two groups of cattle. No problem, right?
Wrong. 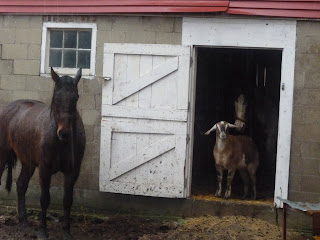 ‘Cause we need shelter and water for the horses and goats, as well. And if you’ve read this blog for awhile, you’ll know that Lucero and cows don’t mix.
So we spent a few hours moving the horses and goats to the chicken pasture. First we had to get the animals to move, and then we had to move the gear. Or bale cages, to be more specific.
You see, horse bale-cages and cow bale-cages are different. 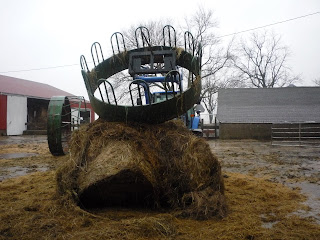 The tractor has ahold of a horse hay-ring. You can see that the sides are open at the top. In the background is a hay-ring for the cows (on its side). There’s a top bar on that one with diagonal supports. The cows have to stick their heads through the holes to eat while the horses get to raise their heads high and chomp in fashion.
Life is stacked against the cows at most every turn like that.
Anyways, Marcel brought one cow cage down from Mom’s place for the calves, changed the horse cage over into the chicken pasture, and then filled them both with hay. In the meantime, I was very handily opening and shutting the gates for him. Yeah, it’s a no-brainer, but also an immense help and time-saver for the tractor driver. 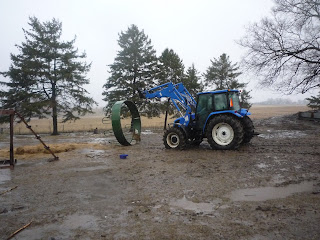 After everything was in place, I walked the lane down the hill and back up to Mom’s, opening all the gates through which we’d soon be running the calves. Did I mention it was raining? 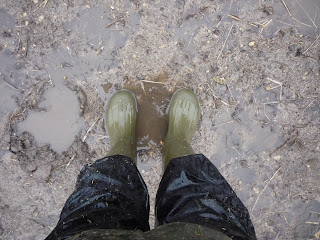 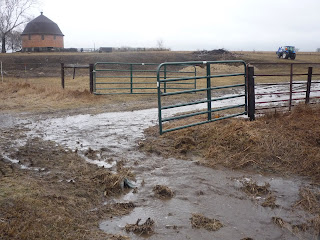 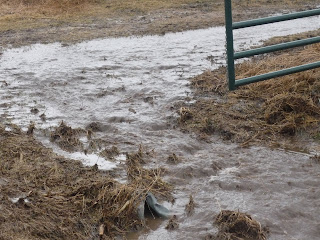 It’s pretty much not a good thing when your pasture has been converted into a mini river.

Anyways, to make an already long story a little bit shorter, we got the calves shut in the round barn and sorted out rather nicely. I gave my mom the camera to take some action shots, but then we had to ask her to hide around the corner because her presence in the doorway was keeping the calves from wanting to run out. Sorry Mom.

So unfortunately I have no pictures of me manning the exit gate, swinging it open to let a calf out when it came round the bend and quickly shut again to keep the momma’s in. This was pretty hard, seeing as both my boots and the gate were sticking, in that suction-type way, in the ankle-deep “mud”.

No photos of Gordy, our most recent Irish Grove addition (and Mom’s new beau), as he dodged the bull and bravely shoo-ed the calves through the barn

No photos of Marcel, cattle-handler extraordinaire, as he weaved in and out through the mass of cows, calves and bull–31 of them to be exact, skillfully separating the mothers from the babes and telling me when to open the gate, and when to quickly shut it.

Just this photo of us in ankle-deep in “mud” after we had the calves first separated, 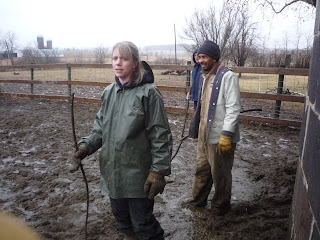 and this one, after we had successfully driven them through the pasture, up the lane and into the barnyard at our house: 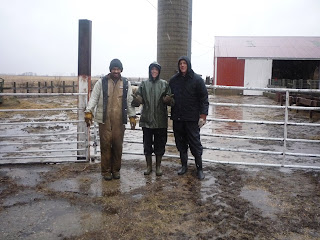