Of Life and Death

June 13, 2009 / admin
The last time I wrote about learning opportunities I was scoffing at a silly mistake I made that could have broken a part on our tractor. In all honesty I was making a joke to deflect my embarrassment at being a dope. A dope that forgot to unplug the tractor before she drove it.
What I’ve come to realize, however, is that being a dope and breaking a tractor part or two is the least of my worries when it comes to the farm. The farm is about more than that. It’s about more than a simple tractor part, and it’s definitely about more than my silly vanity and pride.
The farm is about life and death. Life and death. It’s as simple and basic as that.
The lessons I need to learn and the opportunities that have arisen to provide me with those very lessons have been numerous and varied this spring, as are the emotions that come with the living and dying on this farm. These circumstances have come at a time when I have been feeling impatient with the farm’s progress, with the organic conversion, and with the cows who hadn’t calved and who also hadn’t been very cooperative in my new grazing systems. “I’ve been at this three years,” I kept muttering. “It shouldn’t still be this difficult.”
Yet three years didn’t prepare me for this: 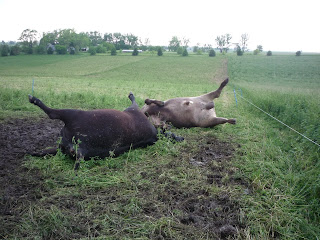 This is our bull and a pregnant cow lying dead in our pasture. They were struck by lightning during a thunderstorm. 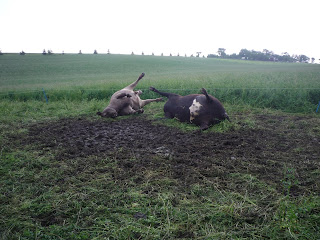 Two good cows gone. All of a sudden my grazing difficulties don’t seem all that important. Instead, my impatience was transformed into dismay and concern. Our bull was so gentle and easy-going. How could we replace him? And this mother cow was one of our lead cows, not to mention that she was due to calve any day now. Death on the farm. It happens, but who expects to find this scene after a routine thunderstorm?

The cows were extremely distressed, so we moved them to another pasture so we could remove the carcasses. In fact, I think it was stress that put one heifer into labor. Our very first calf of the season was born that night. Ironically, the bull’s first offspring was born the day he died: 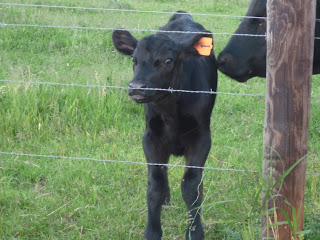 We named her Storm. And she is a beautiful, spunky little Murray Grey.
Life and death at the hands of a lightning bolt.

The shock wore off after a few days as I busied myself with smaller farmer duties–you know, the ones I like to do because I can manage them. The ones that rookies can’t screw up. (And if we do, we can write funny little stories about them.)

But then my favorite heifer was in labor, number 11, and she was in trouble. She had progressed to the point where the calf’s hooves were coming out and then stalled. We let her work for 2 hours wondering if we should pull the calf or let her alone. A cow will suspend her labor if stressed, so if you bother her too soon you’ll cause problems. And yet if you let her go too long, both she and her calf could die.
As a rookie, I have no experience in making these calls. And the literature says you just have to have a “feel” for it. Great. That’s helpful.
Finally we decided to pull it. We corralled her into the chute and called Farmer Scott from down the road. He’s a dairy farmer and is absolutely not a rookie. He showed us how to hook the chains around the calf’s second foot joint and then how to pull it down and away from her backbone. He and Marcel strained, and I mean strained, for about 10 minutes. They got the calf out and he lived, but barely. And number 11 was OK. Ahhh, life. Sweet, sweet life.
Disaster was averted and a lesson was learned.
Or so I thought. Because today we lost one. A nice large heifer calf died because we didn’t pull her soon enough. We acted quicker than last time, but the placental bag hadn’t broken. Farmer Scott came to help once more and told us that if the bag isn’t broken in time, the mother can’t get enough traction to push the calf out and the calf suffocates.
I had seen the intact bag and thought it had meant there was time. Precious time, ticking away for that poor little heifer calf. “It’s hard to say,” said Farmer Scott. “Sometimes an intact bag means you should leave the mother alone a little longer. You just have to get a feel for it.”
There it is again. That “feel” thing. The way I see it, the “feel for it” is a farmer’s way of saying you need to be experienced enough to know. And as easy as it may be to learn to drive a tractor or make good hay, this calving thing is throwing me for a loop. A very precarious loop. After two difficult births, it’s hard to say if I’m really getting a “feel” for calving or not. The first time we waited longer and had a live calf. The second time we acted and it wasn’t soon enough.
I am, however, getting a “feel” for the ups and downs of farming. The joys and sorrows. The celebrations, the frustrations…the life and death of it. I’m just not sure I have enough experience to know how to deal with it.