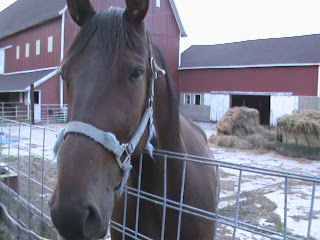 Meet Lucero, our trusty farm horse. He’s a Standardbred–a huge and powerful animal that’s as tame as a puppy dog. He also happens to have a pretty intimidating presence about him. Just ask our cows.
Lucero is his Panamanian name. (Hey, we do more than one culture around here.) His real name is Battleborn, or so it was before we acquired him. But we renamed him our ‘bright star’, which is what lucero means in Spanish.
Lucero is a horse with a past. And that’s no small feat for a horse that’s only 6 years old. Before he came to Irish Grove he lived in the Chicago suburbs, was owned by my cousin Jeff, and was a race horse…a trotter. Trotters and pacers pull these small carts with small men in them around a not so small racetrack, and try to outrun and out-manuever the others. They are harness racers. And the only thing that differentiates a trotter from a pacer is their gait. When a trotter runs, he simultaneously moves two legs which are diagonal from each other, i.e., his right front leg with his left back leg. Pacers move the two legs on the same side of their body at the same time, with both left legs stretching out first, then both right legs.
Lucero’s life as a trotter was short-lived, however, because he was knock-kneed. He was fast enough, but as he got going, his knees would knock together and make him stumble. I know how it is. I was a knock-kneed young kid, too. Thankfully we’ve both outgrown our affliction. But Lucero earned an early retirement, and cousin Jeff generously gave him to us.
Farm life is a little boring for Mr. Big-City Race Horse, though, and Lucero likes to shake things up once in awhile. So when he gets the chance for a little excitement, he’s not gonna let it pass him by.
There go the cows, into their fresh paddock for the week. 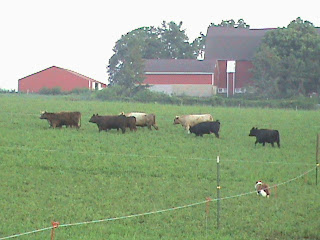 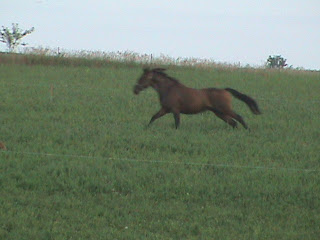 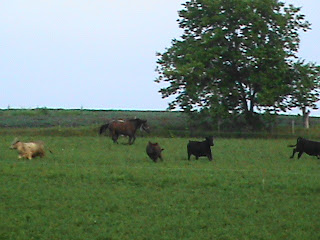 It’s not too late! You can still turn back! 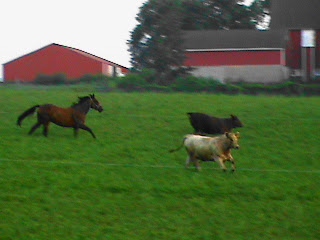 Hey…are you sure you weren’t a rodeo horse in your early days?
Darned horse. Oh, and if the photos are a little blurry, it’s because he was moving so darned fast. Knock-kneed? I don’t think so.