You know those lovely cows I’ve been so enamored with? And how I think rotational grazing is the most awesome kick-butt farming system out there?

Well today I can’t stand either one. And the only butt that’s getting a kicking is mine.

The followers are the pregnant mothers and the bull. Once we move the leaders into their new paddock, these ladies (and one guy) get put into the paddock just vacated by the leaders. They clean up what the leaders left behind, which includes some yummy goodness, but also the less yummy stuff like weeds, alfalfa stalks that have been stripped of their delicious leaves, etc.

This systems allows all of the cattle to fulfill their nutritional needs, but the leaders get first choice at the sweetest, highest energy plants in the paddock, which translates into nice meaty grassfed steers by the end of the summer.

First off, it took us two days and many trips to Farm and Fleet to get the system set up. We had the water tank, but the float didn’t fit it. We got the float to finally work, and then the connection was leaky. We got a new connection but then needed longer hoses. Hoses in place, we found we needed another polytape reel for the extra paddock divisions. Trying not to lose my patience, I bought or found what was needed and moved forward. You see, Marcel isn’t so sure about this grazing stuff, and I didn’t want to show any weakness in the system.

Which in hindsight makes me laugh. Or cry.

Here we are, getting the water tank in place. Ah, the confidence I was projecting. I look pretty convincing, don’t I? 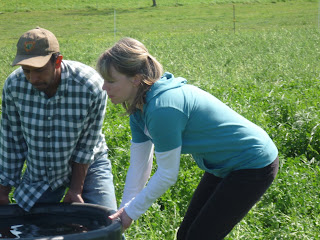 Next we sorted the calves at our place, loading the grassfed steers into the trailer and leaving behind the four Charolais calves that we’re going to grain feed. We haven’t been too enamored of these Charolais so far, and Sunday was no different. They are so skittish it makes the whole group nervous. Because of them, the separating took a lot longer than planned.

But we got it done, and hauled the Murray Greys over to Mom’s pasture. We let the steers into their ‘leader’ paddock, where they got to rub noses with their mama’s across the electric fenceline. 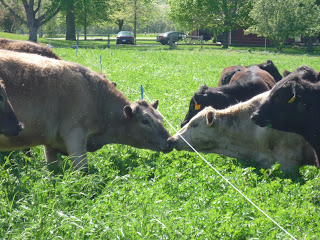 And all was well. For one day, at least.

‘Cause on the very second day of grazing, my lovely children were having so much fun running through the tall, lush pasture grasses……. 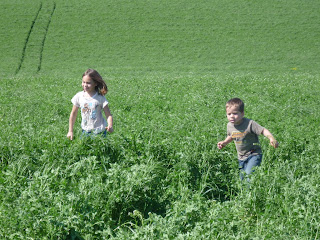 that they spooked the leader calves right through the electrified backline that separated them from the mama cows.

Oh the joy!, the ecstasy!, the sheer delight that overcame these calves as they were reunited with their mothers once again. It almost brought a tear to my eye.

Almost, but not quite, as this wonderful, joyful reunion undid two solid days of work on the farm. It undid the previous day’s work, plus the long day’s work of separating the calves from their mamas that happened a few months ago. On a not-so-nice day, if you recall.

Most importantly, how do we restart our leader/follower system without discouraging Marcel? I need him to buy in to this system because…well, frankly because he’s the backbone of this farm. Without his enthusiasm and belief in this system it’ll be an uphill battle for yours truly. One that I will likely lose.

Ok. So we need to re-separate the calves, but at least for now they’re happily grazing in a nice, fresh paddock, right? Wrong.

When I went to check on the cattle this morning I found two very stubborn, curseword-inducing calves outside of the temporary electric fencelines. They had somehow escaped the paddock.

You’ve got to be kidding me!

It’s not like they were going anywhere, as the perimeter fence would keep them in the field, but the water was in the paddock. And on a sunny, windy day like today, they’d soon be thirsty.

I called Marcel and grumbled in his ear for awhile. He suggested that I take down the whole system, let all of the cows back into the barnyard, and we’d start all over later tonight. “OK. You’re right. That’s fine. I’ll take it all down.”

I hung up, grabbed the pick-up truck, picked up Armando from preschool, and proceeded to torture him (and those two darn calves) for over an hour. I even broke the first rule of cattle rusting–never herd cattle alone–but I’d be d*mned if I was gonna take all that work down and accept defeat.

I moved the mothers, calves and bull into a fresh paddock full of yummy goodness so they wouldn’t pay mind to the fact that I was lowering the electric fence on one side. I pinned the fence down for a 20-foot opening, and then chased those two stubborn calves around the open field until they finally (finally!) saw the opening and crossed over.

I swear they stopped in front of the opening at least 6 times before they decided to cross into the paddock. And speaking of swearing, I think I gave my 4 year old an education, if you know what I mean.

So there you have it. My frustration runneth over, my rotational grazing system runneth amuk, and my yearling heifers runneth with the bull. And I’d better stop saying runneth, or I’ll be talking with a lisp for the re-thst of the day. Laugh.

At least I’d be amused. That’s a lot better than frustrated.