Chickens, and a visit from Cousin Jenny

Well, Saturday was a long one. It took us about 10 hours, but we butchered 40 chickens and filled the freezer with some homegrown, healthy food. I’d post pictures, but, yeah, well…..I imagine most of you just don’t wanna know. Let’s just say that by the end of the day it looked like the entire community of Irish Grove had descended upon our farm to partake in huge feather-pillow fight. And we’ll just leave it at that.

Thankfully we had the help of my sister and her family (my lovely sister who brought her famous cinnamon rolls) and yes, the help of my kids. Ana and Madelina dove right in at the plucking station, along with Laura, Rob, Brady, and Jonathan. Wow! 6 pluckers! Armando even helped, doing a great job of taking the fully dressed (which is a definite oxymoron) chickens over to the cold water tank.

Madelina was the funniest, though, as she had decided to take on the role of narrator for the day. She was getting a kick out of the fact that her Aunt Laura was holding back a retch or two as she plucked her first chicken, and that her cousins were a little more than hesitant to get started. You see, according to Madelina, she had tons of experience in the ole chicken-pluckin’ thang, so she pulled out the big guns and started in with her 1st-grader hipster talk. She started struttin’ around saying things such as “It’s not gross! I think it’s really cool.” and “Look at the guts, their like, so cool lookin’.” (She gets her eloquence from her mother.) Finally I had to step in and let her know that she’d already over-impressed everyone and could put a lid on it.

Anyways, the extra help made the job much lighter for Marcel and I, both physically and spiritually. And then, of course you can’t forget our other helper, my cousin Jenny, who gave us more moral support than actual physical help. Jenny did a good job of holding down a lawn chair, if ya know what I mean. For some reason or another she just didn’t feel like plucking feathers. I can’t imagine why!

That’s okay. Jenny might not be the ‘dive-right-in-and-get-dirty’ type o’ gal, but she is one of our biggest supporters. She loves to come out and socialize, which can be a good thing when you’re filled with chicken guts. Someone has to help keep our minds off the yucky task at hand!

Jenny also likes to drive the PUG when she’s here. It can be a little nerve-racking, though, ’cause, shhhhhh! don’t tell anyone, but…….she’s a crazy driver!

Here she is taking a whirlwind tour of our yard. (Marcel is a brave man!) 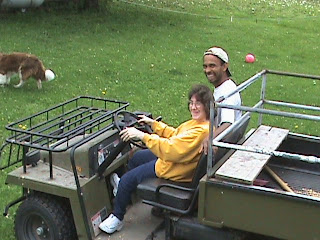 Here she is, almost taking out the garage: 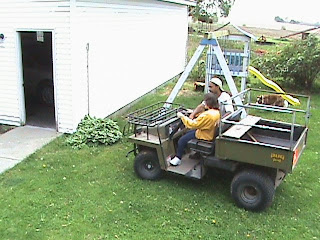 Here’s Marcel, waving frantically for the kids to run for their lives. 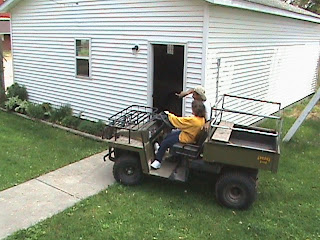 Whew! That was a close one! The garage was saved, the kids were safe, and Jenny had a blast.

I’m sure Jenny is still wondering how she got roped in to coming out to the farm for the pluckin’ party. In fact, that’s probably what most of our helpers are thinking right now. Hopefully the fresh, wholesome chickens in their freezers made it worth it.

Wait! Jenny didn’t get a chicken! Don’t worry, Jen. We’ve got one with your name on it. As creepy as that sounds.